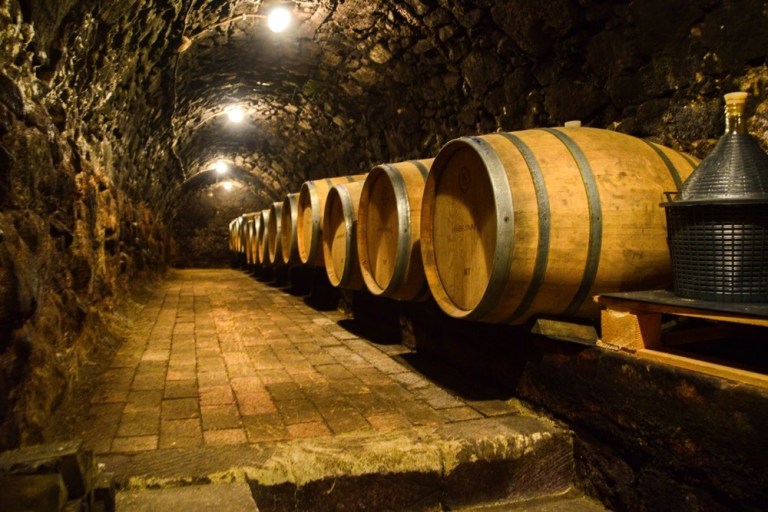 The Tokaj wine region is a UNESCO world heritage recognized historical wine area in North-Eastern Hungary. We spent two days here exploring the town, its viticulture, and the surrounding area.

Tokaji Wine has been produced on the slopes here for an unknown amount of time, with evidence suggesting that Celts in pre-Roman times engaged in the production. The reasoning behind UNESCO’s 2002 decision to award it World Heritage Site status is due to the Tokaj aszú wine, which is the world’s oldest botrytized wine. This is when a fungus (otherwise known as a noble rot) infects the grapes and when they are picked at a certain stage, very sweet wines can be produced.

As a break from Budapest, the Tokaj Wine Region Historic Cultural Landscape (to give it its proper name) is the perfect place to absorb the Hungarian countryside and feel the real country of Hungary. 40 km to the north of the town, the magnificent Boldogko Castle dominates the plain below. Budapest to Tokaj is a relatively easy road trip to make, and can also be reached by train.

Tokaj is located in North-Eastern Hungary about two and a half hours drive from Budapest. The 231 km/ 144 miles journey takes the M3 motorway, followed by the 79 to Miskolc. Here you may also be distracted by the lure of the Diosgyor Castle or the excellent Miskolctapolca Cave Baths. Route 37 is the final leg of the journey to Tokaj. The town is served by trains direct from Budapest-Keleti station, but it takes a wide route and three hours and twenty minutes.

Tokaj was in fact located just 34km from our base in Nyireghaza and we made our way there for the early afternoon. We had rented an SUV in Budapest through Rentalcars.com and so was easy for us to navigate there.

The town is located at the meeting of the waters of the Tisa and Bodrog rivers. The Tisa is Hungary’s second river and flows through much of Eastern Hungary. The waters seemed rather murky to me, but there are opportunities to take a pleasure cruise.

WHERE TO STAY IN TOKAJ WINE REGION HUNGARY

Our first stop was at our accommodation and we had chosen the Hotel Tokajvar on Bajacy-Zsilinszky Endre Ut. There aren’t a great number of hotels in the town and most are priced at €50 or under on booking.com and the Tokajvar was the highest-rated. The room was clean and perfectly functional without any attributes to set it apart. However, there was a pleasant sheltered courtyard area and the breakfast the next morning would prove to be tasty.

Alternatively, the nearby town of Tarcal has a manor-hotel called the Andrassy Rezedencia Wine and Spa for those seeking more comfort within the Tokaj wine region area.

HISTORY OF THE TOKAJ WINE REGION

Tokaj as a town has existed since the 14th century. A castle that once existed was torn down in the 18th century and the buildings which stand now are mostly of 19th-century origin. The buildings of the town are well presented and naturally as one would expect many Pince (cellars) vie for the small passing trade there is. The most attractive of these in a ramshackle kind of way was surely the Boroza Pince. The towns most famed Pince is the Rákóczi Pince which dates from the 15th century which was founded by royalty at the time.

The area has a modern history too which is a controversial one. As Slovakia was separated from Hungary post World War I, a region of Tokaj was then left on the other side of the border. Slovakia continued to produce Tokaj wines, which the Hungarians disputed in the European courts. Under the ruling Tokaj Slovakia is still allowed to be produced. However, we will only focus on the area around the town of Tokaj.

OUR WALKING TOUR OF TOKAJ

The town was a short stroll away from our hotel and passes plenty of cafes, restaurants and ice cream parlours. What astounded me was how sleepy the town was. For a town famed for its wine, both nationally and internationally there really weren’t many tourists to be seen. It was truly refreshing to explore a town not overran.

The town displays some pleasant architecture as we approached Kossuth Ter, most of it occupied by local government. The main square is overshadowed by the quaint Heart of Jesus Catholic Church. In its shadow, the Bacchus Fountain, with a statue of the Roman god of wine and joy riding a wine barrel, encapsulates what the whole town is about. Also bordering the square are the City Hall and Tokaj Museum. We continued our walking tour down Bethlen Gábor Ut stopping for a coffee in the comfortable Tokaji Kaveporkolo, reputedly the best coffee around. We certainly didn’t have any better.

We returned to Tokaj’s main square to satisfy the reasoning why we had come to the town. Why? To drink wine of course. Rakoczi Pince is the most famed of all the cellars so we choose instead to go for wine tasting in Himesudvar, which was a few minutes walk away on Dozsa Gyorgy Ut. Quality and price are often better off the main streets wherever you go. The Himesudvar cellar itself is actually located in a building of much history. It was built in the 16th century as a hunting lodge by the then king of Hungary.

We were treated to an excellent Tokaj wine tour of the cellar in English without having to book. Ordinarily, advanced booking is required, but I guess this was a slow day.  The tour gave a good history of the area and the production of the famous wines. We were humbled by how small an operation some of the cellars have. None of them has the capacity to bottle their wines, and their wine production levels are surprisingly low. Also, the processes are very intensive especially compared to that which I have previously witnessed in Tuscany or Greece. Most of the cellars are built under houses and cut into the hill to preserve a constant temperature. The cellars are only used for ageing and fermenting in oak barrels.

TOKAJ WINE TASTING- WHAT ITS ALL ABOUT

The tour and tasting of six wines cost 2900 HUF each and as wine is always better with cheese and olives we added an additional 900 HUF. The correct order for tasting wines is Furmint, Szamorodni, Tokaji Szamorodni sweet, and then to try the Tokaji Aszu Wines. The program here took us through the different grape varieties of Furmint, Sargamuskotaly (muscat), to Szamorodni, and then to the aszú wine. The aszú wines are measures in puttonyos which is the concentration of sugar in the wine, usually between three and six. Needless to say, the six was extremely sweet and was nigh on impossible to drink. We really enjoyed the dry whites such as Furmint and the semi-sweet Sargamuskotaly and after the tasting, some extra glasses were had.

Angkor Wat & The Temples of Angkor

A Tale of a Crossing During the Great Wildebeest Migration