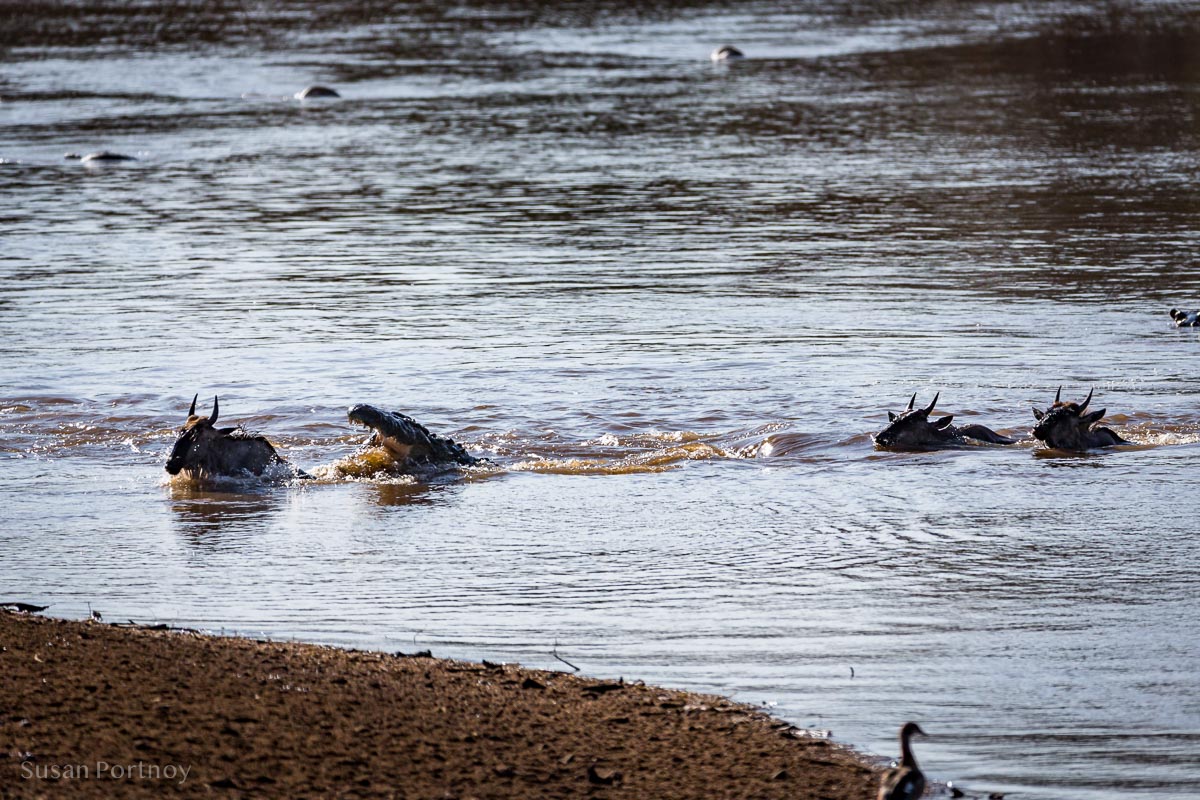 If you haven’t seen a river crossing during the Wildebeest Migration in person, no documentary will ever do it justice. Trust me. It’s akin to trying to capture the enormity of the Himalayas in a photograph or the feeling of flight from a video.

Crossings are unlike anything you’ve seen before. Each is unique and filled with mystery, suspense, and adrenaline-pumping action worthy of a Bruckheimer film, and all too often, the dark thrills of Jaws.

The show was about to begin.

At least I was pretty sure it was. Over the last hour, there were a few false starts. A few tentative hooves touched the edge of Kenya’s Mara River more than once, but the momentarily brave wildebeests lost their nerve and ran back to the herd, kicking up a cloud of thick dust in their wake.

In the bush, when you grow up as a potential entrée, it pays to be paranoid.

I was on a Wild Eye photographic safari in Kenya‘s Mara Triangle specifically for the great wildebeest migration, sharing a land cruiser with a couple from Australia, Paul and Elise McCulloch, and our Kikuyu guide and driver, Sammy.

I chose to believe he took one for the team—one less hungry crocodile– and not just an idiot.

A large herd was on the far side of the river and slightly upstream from where we parked. We sat behind our cameras ready, eyes glued to our viewfinders. It was the McCulloch’s first crossing (first safari too) and I was anxious to see their reaction. They loved the sightings we had in our first 24 hours: giraffe, zebra, ostrich, the elusive pangolin, but I knew this would blow them away.

What is the Great Migration?

Wildebeest crossings are one of nature’s most astonishing life and death dramas. Each year from July through October (give or take a few weeks), millions of wildebeest journey during the Great Migration from Tanzania to Kenya and back again, chasing the rain and the grassy plains that follows.

Winding through the countryside, the Mara River is a formidable obstacle to the wildebeest migration, forcing the herds to navigate steep embankments, rushing water, and opportunistic predators lying in wait. For the lions and leopards and other meat-eaters, the migration is a highly anticipated moveable feast.

From our vantage point––as if they needed any more dangers––we could see there was also a gauntlet of rock-strewn rapids. Trapped between the stones, carcasses lay, bloated and split with decay. Every now and then the wind would change and we’d get a whiff of the foul, gag-inducing stench.

A lone wildebeest shot through the air, its front hooves tucked neatly under its chest, its powerful, spindly legs propelling it 10 feet into the river.

That’s how it usually begins, one brave leader becomes the Pied Piper for the rest of the herd and they all follow, as if someone yelled fire.

Nearly a stampede, the herd rushed forward. The first 20 or 30 leaped into the river as if they were competing for height and form, the water splashing high into the air when they hit the surface.

But soon, it was no holds barred into the drink. A stampeding mass of horns and hooves they moved forward, next to and on top of each other. Their low, nasal honks creating one continuous deafening bee-like hum.

Twenty minutes passed but the herd kept coming, barreling through the water until every last one was on the other side. Wet and bedraggled, they plodded off to find a place to graze.

Crossings and Kills: The Great Migration’s Circle of Life

Another day, we stopped at an entry point multiple small herds were using to cross. Crocodiles, absurdly long and wide, were out in full force, callously pulling the migration’s wildebeests under the water one after the other.

We could see the massive reptiles lock on to their target. We watched their heads slice through the water like a shark’s fin. There was nothing we could do, nothing but watch with a sense of dread. It was nature in its cruelest form.

I was a mix of emotions. I hated the idea of an animal being killed in front of me, but I couldn’t deny I was also fascinated by the spectacle.

“I think he’s committing suicide,” I said to no one in particular.

Between a rush of crossings, a loan wildebeest headed towards the water with a stride indicating he was on a mission.  He showed no sign of the fear the other wildebeests exhibited as they approached the shoreline.

What I couldn’t figure out was why? Was he blind? Less than 10 feet from the shore a 16-foot croc at least 3 feet wide floated brazenly in plain sight.

Didn’t he see the snout filled with razor-sharp teeth hovering a stone’s throw away?

The wildebeest strolled into the water without a moment’s hesitation, the predator disturbingly close to his left.

In response, the croc shifted his position parallel to the wildebeest’s path. He was gargantuan. I could see him a couple of hundred yards, how the wildebeest didn’t is beyond me. He was the oblivious pedestrian unaware that a speeding car was about to mow him down.

At first, the croc moved slowly, sadistically allowing his prey to believe the other side was almost within reach. Then, at the last second, he propelled himself forward quickly closing the space between them.

The soundtrack from Jaws thoughtlessly escaped from my lips and I cringed with embarrassment. Within seconds, the croc submerged, grabbed hold of its quarry and with barely a splash, the wildebeest vanished.

For a long moment, I stared at the circular ripples in the water where the wildebeest had been. My hands were cramped and sweaty from clutching my camera too tightly. My heart pounded in my chest.

I chose to believe he took one for the team—one less hungry crocodile—and not just an idiot.

Visiting Japan Off The Beaten Path: The Gorgeous Shikoku

Letter from Siberia – In search of a gulag ghost-town